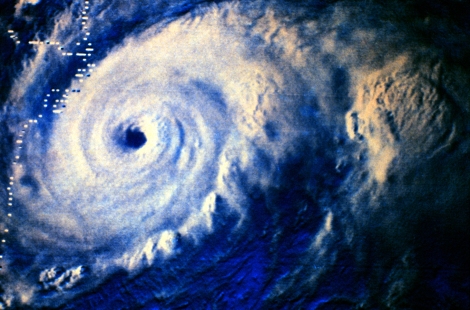 “The word ‘hurricane’ is the name given to nature’s strongest storm.A hurricane occurs when high pressure and low pressure masses of air come in contact with one another.There is often a significant difference in temperature between the two masses. One mass is warm, while the other is cold. The warmer air rises, and the cooler air falls. Likewise, the low pressure area slides down the sides of the high pressure area. They swirl in and around one another, creating the beginnings of the storm.”

–The Word Hurricane, Performed by Air, Inspired by The Virgin Suicides

Surreal September is upon us and in the astrological sense it’s a tinderbox. I have much desired to state that there might finally be a month without any challenging characteristics however it simply is not the times we are living in; we are living through interesting times as the old Chinese curse-blessing goes. The pattern which, has dominated the current sidereal year, has its foundations in the tumultuous Grand Cross back in April. It was there that the initial charges were laid and it was the first contact of the Uranus-Pluto squares inherent in the cross that depressed the plunger and triggered the explosion, and the ensuing months where the culmination of these events. The current Grand Cross is now going to feel like a vast chasm, a cross-roads of sorts.

A cross to bear could be the dominant theme of the month. The overall feel is one of heaviness a kind of urgent criticality emerging from both Mercury and Saturn touching off aspects of the Grand Cross not to mention that as Mars traverse past the trajectory of the grand cross there will be formed a tense T-square between some volatile frequencies. It is said highly volatile agents that are setting the scene for an irrevocable decision to be made at the intersection that will be a radical course correction. On the world stage it could play out with a surprising direction that could go either way, the point is it will be outlandish seemingly coming out of left field (Uranus is the focus of the T-square as well as one of the more volatile arms of the Grand Cross). It seems appropriate given the ongoing tensions in the Middle East, and the Ebola outbreak in Africa with some experts warning that it is spreading faster than it can be quickly contained , although one of the hot-zones in recent weeks has seen the storm finally blow over and is taking tentative steps to opening back up out of quarantine.

Perhaps a surprising new direction for civilization will emerge from all of these crises, and one that may prove irrevocable and set the course for future development, now granted it may not be as dramatic as shaking our global society down to its core, but then every decision of late has collective effects on all of humanity and could go so far as to determine whether we pass through our global initiation into species-adulthood still wearing the mantle of complex technical society. This Grand Cross will drive this point home powerfully, whether we decide to take the message of Pale Blue Dot to heart and learn to finally share this planet and its resources equitably and in a way that maintains the integrity of Nature’s operating system, or we decide to move towards extinction remains to be seen, stay tuned. Pay special attention to what religious authority does as it seems something big may blow up in that sector that could have far reaching ideological effects that could inflame or calm current hostilities.

Individually it could feel like we are splayed on the Inquisition’s rack being pulled in four demanding directions threatening to tear us apart at the edges. If the feeling waking up is one of exhaustion before the day has even put its wheels on this might be why, it is a perfect storm of dynamic forces pulling at us all, and the only way out if through, and remember to stay in the still eye of the hurricane and not get thrown about in the maelstrom swirling before you.

The forces involved are Pluto in Sagittarius, demanding an overhaul of our outlook on life, and all of our institutions having to do with higher education, and expanding visions, legal systems are included under that purview as well. Individually it could feel like a violent confrontation with the world’s ideologies and being largely at odds with the current consensus reality. Pluto is lighting a flame under the proverbial ass of humanity, as well as acting on a personal level (especially if natally Pluto makes aspect to any personal planets). Uranus squaring Pluto usually signals a tinderbox of events that can lead to violent confrontations with consensus reality, what is out of step is the link between what we observe and what we do, this tense aspect is calling for radical departures. Touching this off further is Neptune being in mutual reception occupying Aquarius, adding to the Science Fiction dreams so many of us are trying to realize.

It is not made any easier with Mars in on the action demanding we act, and in Libra, it signals a need to act on agreements that harmonize our disparate interests into a common framework so that we can create a civil commons which allows us to assert liberties without unduly demanding others be trampled on. Mars gets thoughtful when in Libra, and cleans up nice, he learns some diplomacy but squaring Pluto does mean that an uneven social contract can be torn to bits once the shit hits the fan. Finally Jupiter making aspect to this trifecta of malefics adds a magnifying glass to the whole affair and being in the sign that symbolizes the people or humanity itself (Cancer) could mean that emotions are on a hair-trigger and seemingly small grievances could go super-nova, making hostilities that seem contained explode out of their confines and spill-over exacerbating current crisis mode, the world is on high-alert and many of us are feeling anxious and tense in our own lives.

A Mercury opposition to Neptune means that for a stretch the voice of reason could get lost in the fog, it serves well to keep our wits about us in this swirling morass, and to focus on logical solutions as the irrational is a default setting under these transits. All of this is made even more weighted by the gravitas that two Saturn aspects touch off by making it all very real, the get real planet sextiles Venus, signaling an opening to deal with partnership issues and resource sharing issues on the global scale. Saturn will then sextile the Sun when it makes entre’ into Virgo later this month, bringing reason and precision into the light of day which could lend a helping hand in all of this explosive unpredictability. The Sun will also form a trine with Pluto, making it easier to find a passion and pursue it, perhaps at this time a viable solution will be found to vexing problems and it will be followed at full intensity, the chips fall where they may.

The trick to turning a seeming liability into an asset is to recognize that these selective pressures are catalysts that are pushing the living complexities into a higher state of functioning including us, these are the challenges of our spiritual adulthood and while they are daunting in the words of Stewart Brand “we have declared ourselves gods, and we have to get really good at it.” No pressure or anything. On the lighter side, when we do come out the other side of these singularities we are often better for it, stripped of unnecessary baggage and possessing clear vision on how to proceed radical new directions are often taken and they lead to long-standing resolutions that often benefit the collective, it is a kind of phoenix rising from the ashes feeling.

To highlight, there is a happier vibe to all of this as the edges are softened by the presence of Venus and Jupiter touching off these tense aspects, Jupiter is currently in his exaltation which puts him in a very happy place and ensures that he gets everything he could want, and Jupiter wants to play, and to unite humanity in a living language. Venus wants to connect and through the earlier half of the month will do this dramatically and with the warmth of the day-star as she finalizes her transit through Leo and into the more subdued sign of Virgo. Virgo will give Venus a little hustle and desire to sweat plus a purifying element. If there ever was a time to wipe the slate clean in our relationships and let go of past grievances this is the time to maximize that potential, considering it going to the healing waters and re-virginizing yourself as the temple priestesses of antiquity where alleged to have done (Virgo is the Virgin)

I truly wish I could say that September would be smooth sailing alas it seems the ongoing intensities will continue to ensue. In large part it can’t be helped we are living through times of transition and these are the growing pains.

I will see you all next month space cadets, in the meantime keep calm and carry on. Don’t forget to tune in Sunday September 13th at 10:30am, where I join with my friend HiC Luttmers, to hear the live version of this post: http://www.blogtalkradio.com/fireflywillowslive/2014/09/14/revolution-with-hic

I do readings!! Feel free to contact me via the Siderealist website where I can be found under the Prometheus staff tab, which links directly to my contact info.